Rememberence ceremony at the Commonwealth Cross of Sacrifice in Dublin. 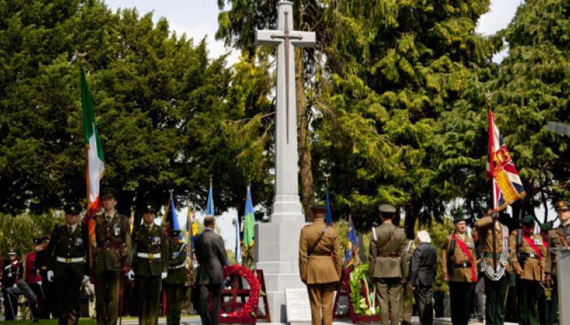 Irish men and women have served and died with military personnel from around the Commonwealth. As we commemorate the centenary of World War One, the Commonwealth War Graves Commission has supported the Irish Government in erecting a Cross of Sacrifice at Glasnevin Cemetery, Dublin. The event was also co-led by the Glasnevin Trust. In a highly symbolic cermony in 2014, a variety of political, civic, diplomatic, and military representatives where in attendence, as were members of the public.

Irish President Michael D. Higgins made a moving address, further to the unveiling of the Cross of Sacrifice with an honour gaurd and band drawn from both the Irish Defence Forces and the British Army. Other contributions were provided by Heather Humphreys TD, Irish Minister for Arts, Heritage and the Gaeltacht; along with Ms Theresa Villiers MP, the British Secretary of State for Northern Ireland.

The former Resident Historian with the Commonwealth War Graves Commission, and Irishman, Dr. Edward Madigan, also played a significant role. The ceremony ended with a minute silence, followed by the Irish and British national anthems and the Last Post. Further details on Ireland’s role in WWI can be found by clicking here. Ireland continues to collaborate with military forces from around the Commonwealth. This includes the following